20 Warning Signs Of A BJJ McDojo 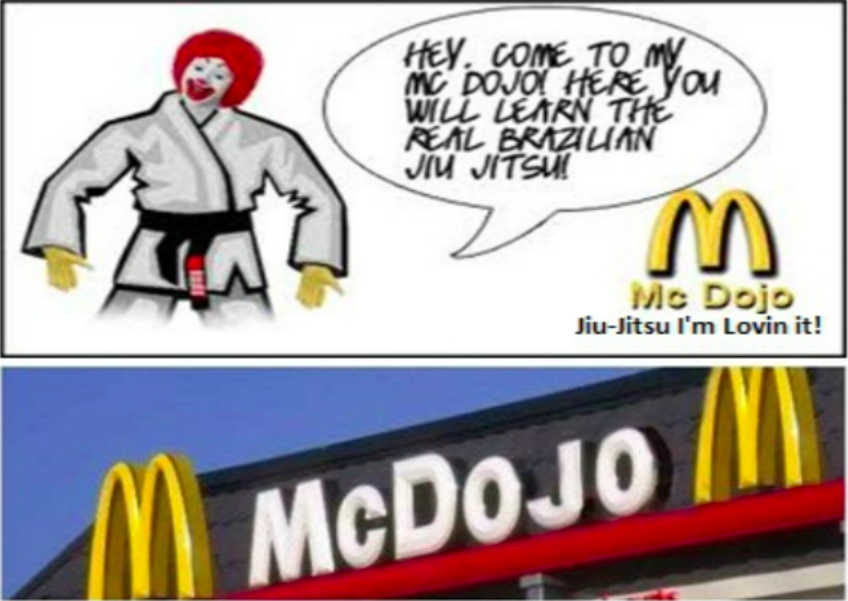 Here are some signs of MCDojoness. Some legit schools have some of these features, if your school has most of these features then you should be asking yourself some questions. Just to specify that we are talking about Brazilian Jiu-Jitsu here, with the gi. In some submission wresting/MMA schools instructor’s BJJ lineage is not that important. 1. The instructor’s lineage is unclear.

Who did the instructor get his/her belts from? If you ask them the simple question “who did you get your black belt from?” and the answer is unclear or confused then be careful. That means that something is wrong or that the instructor has lied or is covering up of past lie.

If a club tries to tie you in a multi-year deal with very difficult exit requirements then you know that they are trying to get your long term commitment by clinging to your finances. They’re in it just for the money.

3. The instructor, who doesn’t have any serious injuries, never spars with his students.

5. The instructor has a cult like following from his students.

Discipline is important in any school, however some instructors push it too far. In this case, it’s not a MCDojo, it’s a cult!

6. Your instructor and team mates begin to impose their will upon the rest of your life.

8. The academy has “Black Belt Fast Track” course or ‘Junior black belts’ for children…Black belts in BJJ are earned by blood, sweat and tears not by paying more or by hours of attendance.

9. There are extra belt colors. Beware of a school that has adult green belts. This ‘intermediate’ belt does not exist in BJJ and has been added in between white and blue belt to give incentive for students not to give up before getting a blue belt. In Brazil where BJJ comes from, there never have been adult green belts. This is a something that has been added in the US, Europe and other countries.

10. The instructor teaches self defense without having had real life experience in the ‘real world’ (is not ex army, police, security, bouncer etc) he just learned it from a certified courses.

11. You are not allowed to compete. It is not “honourful”. The academy doesn’t encourage competing or has a very poor competition record. There are Jiu-Jitsu academies that teach a more self defense type of Brazilian Jiu-Jitsu however competition, just like self defense, has it’s place in a BJJ player’s path. How can you consider yourself a BJJ player if you have never even competed once?

12. The instructor is a blue belt in an area surrounded by black belt schools. There some examples of these kind of schools. One of them is a Gracie Jiu-Jitsu school in London where the instructor is a blue belt. That academy is walking distance from Roger Gracie’s academy which houses a bunch of black belts. You also have all the top academies in London nearby. Where would you rather learn Jiu-Jitsu?

13. The students only start to roll after 6 months or so of having learned techniques. There is some logic in that way of of thinking, however, rolling with a fully resisting opponent is an important part of a beginner’s understanding on Jiu-Jitsu. Getting smashed as beginner is also part of the learning process.

14. The instructor is a black belt in Judo/aikido/karate and a blue belt in BJJ (or any other belt) but wears a BJJ gi with his TMA black belt. Run for the hills when you see this 🙂

15. The instructor charges for stripes and belt promotions. advancement in rank is an expense instead of a honorable achievement.

16. It looks like BJJ, the techniques are BJJ, the gis are BJJ, the style is BJJ but….it’s not BJJ. It’s got a goofy name like Gorilla Jitsu, ground fighting Do or Mongolian/ American/ Russian Jiu-Jitsu…

18. Nobody ever fails at belt tests.

19. Cross training in judo or wrestling is discouraged.

20. Your instructor has a habit of dating students.