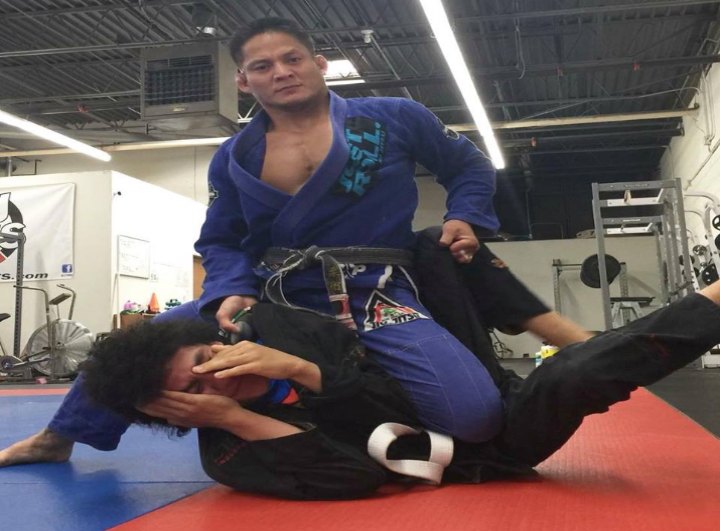 Photo: Mark Vives. Guest post from Thomas Nadelhoffer the Grumpy Grappler, an Associate Professor of Philosophy, Psychology, and Neuroscience at College of Charleston (SC). When he’s not enjoying time with his wife and pups in the lovely lowcountry, he’s obsessed with the grappling arts. He has traveled the country and the world as part of his ongoing jiu jitsu journey and he hopes to do more exploring soon.

In the jiu jitsu community, one often hears the importance of being “ego-free”—that is, of setting aside one’s pride and hubris and being as humble as possible. Yet, this is especially difficult for some practitioners to accomplish (partly based on their upbringing and partly based on their temperament). Indeed, every gym has one of “those guys”—guys that seem interested only in themselves, their own progression, their own training time, etc. It’s these same training partners who also tend to have an inflated sense of their own value, skills, and accomplishments. These two traits—self-centeredness and an inflated ego—are not a recipe for a good student, training partner, instructor, etc. Unsurprisingly, egocentric students tend to be widely disliked by other students—especially students who have less skill, strength, or athleticism as they are often the nail to the narcissist’s hammer.

Egocentric students also tend to display hubris when rolling with upper belts—that is, they end up manifesting foolish pride and perhaps even dangerous over-confidence.  Rather than being respectful and trying to learn as much from the roll as possible, these students often roll with reckless abandon as if a medal or championship depended on it. In short, egocentric and self-centered students who are prone to hubris tend to detract from rather than add to the gym. They selfishly drain from the gym while giving little to nothing positive back. So, what can and should be done?  More on that in a minute. First, I want to pause to tie this issue to my own research and to extol the virtue of humility.

It turns out that for the past few years, I have been working with a team of colleagues from College of Charleston and Duke University on an interdisciplinary investigation into the nature and value of the virtue of humility. During this time, we’ve explored the folk concept of humility in children, adolescents, and adults (that is, how people at different ages think and talk about humility), the dispositional trait of humility (that is, what kind of psychology features constitute humility and foster humble attitudes and behaviors), and the positive psychology of humility (that is, what kinds of interpersonal and intrapersonal benefits are enjoyed by humble individuals. Our project has been fruitful but fittingly humbling.

In light of our findings, we have developed a new account of humility. On our view, the twin hallmarks of humility are low self-focus and high other-focus—that is, humble people (a) do not prioritize their own interests, attitudes, beliefs, desires, and needs and (b) they are also sensitive to the interests, attitudes, beliefs, desires, and needs of others. We found that humility (thusly defined) to be positively related to other important attitudes and behaviors including (but not limited to): civic responsibility, gratitude, humanitarian-egalitarian attitudes, empathy, moral identity, integrity, benevolence, mindfulness, conscientiousness, and the tendency to feel guilt for bad behavior and seek to repair wrong-doing. It also correlated with important markers of psychological wellbeing: optimism, hope, achievement values, positive life-regard, secure attachment, positive growth, personal relationships, decisiveness, comfort with ambiguity, and openness to experience. And it was negatively related to sadism, psychopathic tendencies, and insecure (anxious) attachment, as well as economic and social greed. Given the important relationship humility seems to have with other moral attitudes and behaviors, we have even come to think of it as a foundational virtue.

It’s therefore unsurprising that I think humility is a very important trait to be fostered among jiu jitsu students. Just look at how many characteristics associated with humility are instrumental to learning and practicing jiu jitsu—e.g., mindfulness, conscientiousness, the tendency and willingness to repair wrong doing, optimism, comfort with ambiguity, etc. Moreover, note that people who lack humility have traits that don’t make them suitable to be a positive (rather than destructive or toxic) presence in the gym—e.g., sadism, insecurity, and greed. But how do you help egocentric students lose their egos? There are a number of possible approaches, but for present purposes, I will just look at two broad strategies.

First, you can rely on what behavioral economists and social psychologists call “nudges” and “pushes.” On this approach, you subtly or not so subtly “teach the egocentric student a lesson.” You can do this by making sure that he is “smashed” and “rolled up” by those above him in rank whenever possible. In short, you try to beat the ego out of him. In my experience, this doesn’t work especially well since the increased intensity used to keep someone’s ego in check may inflame and agitate egocentric students. Rather than having the desired calming and ego-deflating effect, relying on this approach may counter-productively increase the individual’s intensity, which would in turn bolster his ego. So, as tempting as it is to rely on nudges and pushes, they aren’t the best route (at least when used in isolation).

The next (and I believe more promising) strategy involves having a discussion or “heart to heart” with the egocentric student in the hopes that his self-awareness, self-reflection, and self-control might lead to an improved attitude and better behavior. One of the main benefits of this dialogical approach is that it appeals to the student’s reasoning rather than bypassing it as is the case with nudges and pushes. In the case of the nudge, the student is supposed to “get the message” without a word being said. As I suggested earlier, sometimes this message is lost on the egocentric student. With dialogue and discussion, on the other hand, you try to explicitly reason with the student and encourage him to change his ways. You provide the student with clear guidance and explain the importance of low self-focus and high other-focus for one’s jiu jitsu journey. And if neither nudges nor open dialogue work (even in combination), then perhaps it’s time to simply ask the student to find a more suitable gym (or leave the sport altogether). Jiu jitsu is based on humility, respect, trying to improve both oneself and others, trying to make a positive rather than negative contribution to the gym, and other principles and practices. If someone is too egocentric to embody these values, then perhaps jiu jitsu isn’t for him. Advertising slogans to the contrary, jiu jitsu is not for everyone.

p.s. Of course, instructors will only be able to teach their students respect and humility if they lead by example. An arrogant, boastful, egocentric, and selfish instructor is likely to produce the same kind of students. So, chose your gym and instructors wisely.